I think today... I'll do some worldbuilding for the fantasy world I'm making

I haven't got many details of the cultures or anything yet, but now I have this map I can more easily work things out.

Each hex in the map is ~250km across, meaning that this map has a total area of

* The seas beyond this map are endless in every direction - there are occasional islands, but no other known continents
* In the middle of the map, you'll notice a C shaped island with some smaller islands poking out of the inner curve.These islands are perfectly curved - this is not the natural state of them, but rather the result of a several hundred year project by the kobolds who live there

the weather of this world is shaped like a spiral, alternating between zones of coldness and ice and zones of warmth and humidity, with the spiral centred on the middle of the map

this entire thing should have been tagged with #worldbuilds #worldbuilding #cartography

@gwyfyndraig Have you seen the fractal map makers around? Or did you generate that by hand?

@Canageek I made it by hand, following this:

1. Print off some hex paper
2. Draw approximate shapes of the continents along hex lines
3. erase 3-6 hexes, redraw with details
4. if it looks crap, redo that section
5. repeat 3-4 until the entire map is done
6. scan
7. trace over the drawing in Krita

attached is the map as it looked after step 2 https://dragon.style/media/AkRWxIsuuDYamfhRKcc

@gwyfyndraig Check this one out! http://donjon.bin.sh/world/ you'll kind of get the same end result, but in any map projection you want

@Canageek that's not really the same end result, because:

* it can't make interesting shapes like the spiral on the right continent, or the claw just next to it
* it can't help me think of and imagine ideas while I'm drawing it - for example the islands closest to the middle? I decided they're shaped to be as smoothly curved as possible by the kobolds who live there. I wouldn't have thought of that with a generic map. or notice that in my original hex map, there were only 2 continents, whereas in the digital there's a channel between the two largest landmasses on the left - by reconsidering and adding that channel, it gave me a chance to think about the civilisations that live around it, what wars and conflicts they've been on, how trade works, what the climate of that region is like
* I like drawing maps like this, it's really really fun
* my digital map also secretly still has a hex grid under it, which means when I go to draw natural features, or language boundaries, or nation boundaries? I can just follow the hexes again, to get a general shape, then add details later, which greatly assists the design process 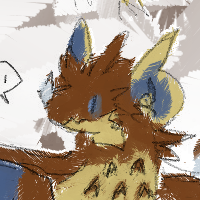 @gwyfyndraig Oh I didn't see this bit yet

If you've not done any further work on it, where do the worlds' rivers run?